NJ.com- Gov. Phil Murphy unveiled two long-awaited plans Monday to fix NJ Transit by guiding the spending of billions of dollars on major projects and purchasing new trains and buses that was recommended in a $1.3 million audit he ordered in 2018.

A $5.7 billion five-year capital plan and the agencies first ever 10-year strategic plan, were among the recommendations of transit advocates and in the 2018 North Highland audit ordered by Murphy and announced at his Monday press briefing with NJ Transit CEO Kevin Corbett. Both plans are on line.

The plan, dubbed NJT2030, contains 26 strategies in five goals that include ensuring systemwide reliability and safety, delivering a “high-quality experience” to riders, “power” a stronger and fairer economic recovery, build an more accountable, innovative and inclusive culture in the agency and promote a more sustainable future for NJ Transit and the state.

“It provides us with direction the agency lacking when we arrived,” Corbett said.

Murphy has vowed to fix NJ Transit, which he called a “national disgrace” at the beginning of his term, even “if it kills” him. The five-year plan was scheduled to be released in the spring, but the coronavirus pandemic delayed that.

“This plan has been more than a year in the making, and stems from countless conversations and interactions with customers and employees, as well as a robust peer review of how other mass transit systems are working to meet their challenges,” Murphy said. “If we have to get one thing right it’s the ability to move people and things around better and safely...these plans go right to those objectives.” 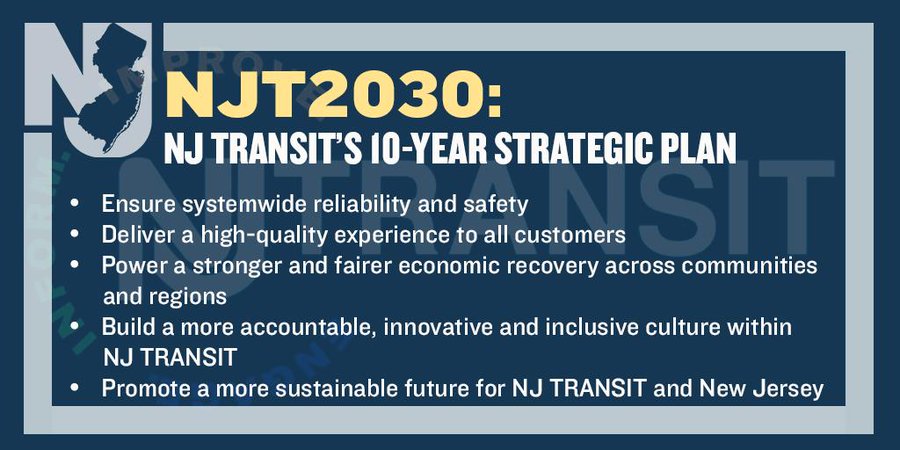 Before the coronavirus decimated the agency’s ridership due to stay-at-home orders, commuters and advocates criticized the agency for delays, canceled trains and buses and equipment failures that turned commutes in multi-hour ordeals when problems arose.

Officials said the strategic plan will address some of them including on-time-performance improvement, adding service congested bus routes and replacing aging trains and buses.

The Strategic Plan’s identifies projects either currently proceeding and unfunded projects that are vital to delivering service, he said.

“We know what happens to quality and reliability of service when that doesn’t happen,” Murphy said. “That’s the hole we’re climbing out of."

Could the price of the plans trigger a fare increase?

“We haven’t promised forever. I’d like it to continue and say no fare increase to June 30 next year,” Murphy said. “I hope we can go longer than that. It is too soon to tell.”

The five-year capital plan could be stretched to a six-year plan if it had to, but Corbett said it is modest when compared to capital plans for New York’s MTA or the LA Metro.

“We have to live in certain realities. A five-year plan can become a six-year plan, but it galvanizes civic and business groups to get the funding levels,” he said.

But neither the capital or strategic plan had details about finding a dedicated source of funding for NJ Transit’s operating budget to end the practice of using capital money intended for long range projects and equipment purchases, to fund operations instead.

Having the plans also make a strong case when NJ Transit applies for federal grants for projects or equipment purchases, Corbett said.

The 179-page audit report, released on Oct. 9, 2018, identified failures including “inadequate, uncertain and unsustainable” funding, no technology vision and no plan to oversee $5.3 billion in capital assets.

One year later in October 2019, NJ Transit officials said progress implementing in some areas, but not in the strategic plan. The agency hired consultant McKinsey & Company for $3.5 million in September 2019 to implement the remaining audit recommendationsMurphy signed the executive order starting the audit almost 10-months ago in the Summit train station.

Murphy said he wanted the audit completed as “fast as possible” -- possibly within three months. Instead it was delayed for three months and did not get underway until May, after a $1.3 million contract was finally awarded to the North Highland Company on April 30.